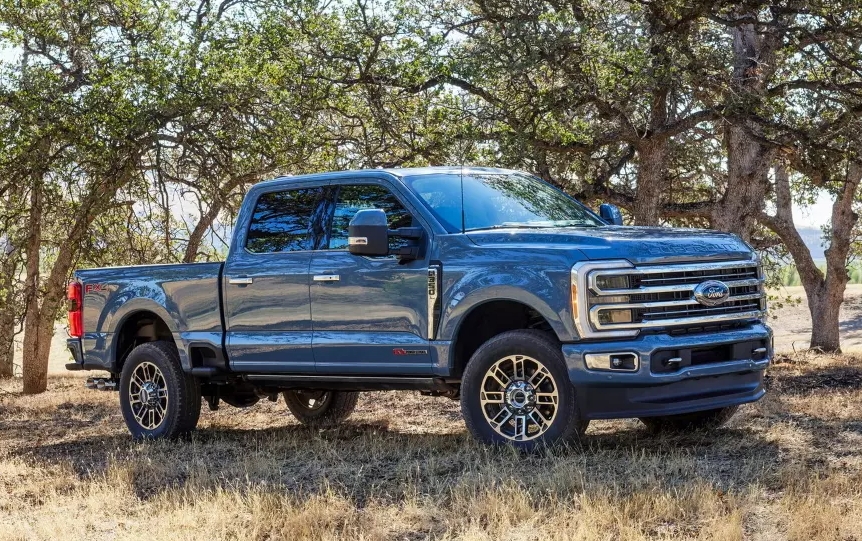 A family of all-new Ford F-Series Super Duty trucks debuted in the US. Following the original F-150, heavy pickups have gained advanced electronics and become much more convenient to work with. And for the F-Series Super Duty, two new engines were prepared at once: a 6.8-liter naturally aspirated petrol and a deeply modernized 6.7 PowerStroke turbodiesel. Specifications were not disclosed, but Ford promises record-breaking power and torque.

The Ford F-Series Super Duty family changed a generation after just six years. The pace of updates is dictated by competition: in order to stay at the forefront of the arms race, the “blue oval” developed a new truck, carefully analyzing the complaints and wishes of customers.

At the forefront is practicality. To improve access to the loading platform, Ford added side steps in front of the rear wheels, corner steps on the bumper and notches on the sides for finger hooking. Other markers of the fifth generation Super Duty are headlights with C-shaped daytime running lights and lights with a black bar in the center.

As before, heavy pickups can be with a single, one-and-a-half or double cab. The basic two-door versions are based on an eight-foot (2.44 meter) aluminum body with a volume of 2223 liters. Modifications with an enlarged cab can have an 8-foot cargo platform, and a shortened 6.75-foot (2.06 meters with a volume of 1852 liters). Depending on the model (F-250, F-350, F-450 or F-550), the truck can be equipped with rims from 17 to 19.5 inches in diameter, and the outer diameter of the tires reaches 35 inches (with Tremor off-road package). Heavy-duty pickups with twin rear tires are also available.

The base engine of the Super Duty family of pickups is a 6.8-liter V8 gasoline with a cast-iron block, aluminum heads and multipoint fuel injection. Ford did not release specifications, but made it clear that the output of the new unit surpassed the 6.2-liter V8 Boss (390 forces, 582 Nm).

The alternative is the 7.3-liter V8 Godzilla, which is tipped to have an improved cooling system and different calibration to achieve “best-in-class horsepower and torque in a gasoline engine.” At the moment, Godzilla produces 436 horsepower and 643 Nm.

In pursuit of the traction record, Ford has seriously upgraded the 6.7-liter V8 PowerStroke turbodiesel. Announced new exhaust manifolds and turbocharger, as well as the original firmware. Motorists promise the best torque and record power in the segment, which means that the new diesel Super Duty will have more than 482 horsepower, and peak thrust will be over 1458 Nm! All fifth-generation heavy pickups are equipped with a 10-speed “automatic”; all versions, except for the base one, are equipped with four-wheel drive, as an option there is a rear differential lock.

The interior of heavy pickups has evolved, but there are many improvements. First, Ford added a 12-inch digital instrument cluster to the trucks. Secondly, a multimedia system with a 12-inch touchscreen is now required for all Super Duty, except for the basic working version of XL. Thirdly, the center console has become lower, the wireless charging unit has been moved to the driver, the steering wheel, air ducts and door cards have changed.

Ford found that 96 percent of buyers use Super Duty pickups as tractors, so there’s a whole host of improvements to make towing easier. An unprecedented feature is Pro Trailer Hitch Assist. After activating it, the pickup truck itself finds the hitch, backs up to the trailer and docks with it. It is argued that the owner does not even need to look in the mirror or turn the steering wheel: the process occurs automatically under the supervision of cameras. No competitor offers this option.

Another “trick” is navigation adapted for driving with a trailer. The owner needs to enter the weight and size of his trailer into the system, and a special program will calculate the route, bypassing sharp turns, low bridges and overpasses. The electronics will also advise on how to optimally load the trailer so that it does not destabilize the entire road train.

Other useful assistants include an improved blind spot monitoring system that works even as part of a road train, and advanced all-round cameras that show from the outside not only the pickup itself, but also its trailer. Finally, the rear camera is installed so that the driver receives full information even when driving with the side folded down. Optionally available is a galaxy of front cameras with the function of simulating a “transparent” hood off-road.

In terms of versatility, the Super Duty is not inferior to the usual Ford F-150: there is a locker under the rear seats that is locked with a key, sockets are provided in the body for powering electrical appliances with a power of up to two kilowatts, and almost any superstructure can be mounted on the F-Series chassis.

The improvements to the power structure of the F-Series Super Duty pickups are described in general terms: an all-new rear axle and an upgraded brake system with larger discs have been announced. In terms of active safety, the most equipped trucks are equipped with adaptive cruise control with a “traffic jam” assistant, a lane control system, automatic high beam switching and a warning system for oncoming traffic when turning left.

The fifth-generation Ford F-Series heavy pickups will go on sale in early 2023, which means the trucks will enter the US market at the same time as the updated Chevrolet Silverado HD. Specifications and pricing will be revealed before sales start, but you can expect the base working version to be under $40,000.