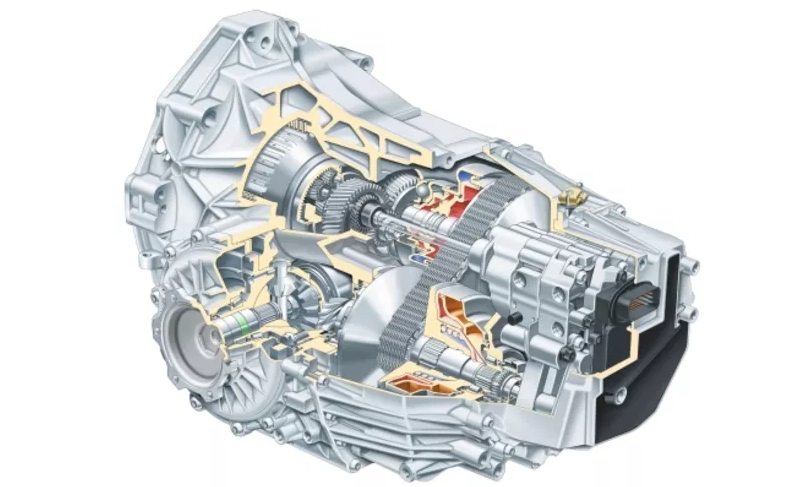 The design of the continuously variable transmission has been known since the times of Leonardo da Vinci. Currently, in a new version, it is more common than ever. Innovative straps, control concepts and hybrid drives give the impetus to this driveline technology.

As long as cars are powered by internal combustion engines, they will need a gearbox. The reason for this is easy to explain, because each internal combustion engine works between the minimum and maximum rotational speed. If we take into account the speed of the engine itself, then at its rotational speed of 6000 min-1 the car could go at a speed of over 600 km / h. However, current engines do not yet have the power to overcome the driving resistance at these speeds.

This is because within its operating speed range, the engine only delivers a limited amount of torque. The gear ratios in the gearbox convert high engine speeds into pre-set wheel speeds. By reducing the speed of the engine, they increase the drive torque. This means that in first, lowest gear, only low speed and high driving torque are possible. The more gears a gearbox has, the better it can adapt the engine power to a given driving situation.

In the case of CVT transmissions, the rigid coupling between the driving speed and the engine RPM has been removed for the individual gear stages. This solution has two advantages. First, the gear ratio can be fine-tuned according to the operating characteristics of the engine. This results in greater driving force. Second, the gear ratio can be adjusted with a partial load present so that engine operation remains within the minimum fuel consumption range.

The collective term “continuously variable transmission” covers many transmission concepts: mechanical, hydrostatic, hydrodynamic and electric. Today, passenger cars use Continuous Variable Transmission technology, in which the drive is transmitted by two pairs of bevel gears and a sliding belt or modular chain. A CVT is a mechanical transmission like a gear transmission. In turn, the hydrostatic transmission is mainly found in commercial vehicles (buses, tractors, construction vehicles).

Belt or chain in a continuously variable transmission

There are two techniques for making the element surrounding a pair of gear wheels of bevel gears, for example:

The pressure belt consists of two multi-layer strips, each of which consists of several thin and very strong steel rings. The two straps are fastened together with steel buckles.

The Mercedes-Benz A and B class CVT uses a belt fastened with 400 buckles. These cables transfer power from the primary to the secondary pair of bevel gears by the downforce. The drive belt is now loaded with a maximum torque of 300 Nm in series production.

In the case of Audi, the lamellar chain was able to withstand even higher torques. In this technology, which was first put into series production in 1999, power was transferred from the wheel pairs of the bevel gears to the two-piece chain pins by friction.

The pins are connected to each other by connecting plates which – unlike push links – transmit forces through tension. The leaf chain consists of 75 pairs of pins connected by 1025 individual plates.

The most important element of a CVT are bevel gears (main and auxiliary), also called variators. Each gear consists of one bevel gear permanently attached to the shaft and one that can be moved along the shaft axis. Hydraulic pressure cylinders move the two movable bevel wheels while driving and thus change the gear ratio.

During start-up, the distance between the bevel gears is large on the shaft on the motor side and small on the shaft on the axle side. In this state, the overall gear ratio is small and designed for maximum drive force – similar to a manual gearbox in first gear. As the speed of the car increases, the hydraulics reduce the distance between the bevel wheels on the engine side and increase it on the axle side pair. This changes the radius of action of both pairs of bevel gears and thus the gear ratio.

However, even a CVT transmission cannot do without gears. In order to be able to drive in reverse, the gear set shifts the drive of a pair of bevel gears as needed. As with other automatic transmissions, CVTs are usually equipped with a hydraulic up-down torque converter for a smooth start.

In the case of a CVT, the tasks of the driver and the manual selector are taken over by an electronic control unit. Based on the driving and engine data, it calculates the optimal gear ratio. Then it regulates the pressure of the hydraulic oil in the pressure cylinders so that the moving wheels of the bevel gear are in the desired position.

It is important that the pressure is always great enough so that the belt or chain does not slip between the bevel pulleys. Also, the hydraulic pressure must not be too high as this will consume power unnecessarily.

In the next phase, the gear ratio is adjusted to optimize driving and fuel consumption. If the driver takes their foot off the accelerator, the variator will automatically shift to a higher gear. The electronics even offer programmable fixed gear ratios, so the CVT actually shifts gears like a gearbox, without interruptions or jerks when shifting gears.

Some car makers, such as Subaru, even equip their continuously variable transmissions with paddle shifters on the steering wheel or manual switches in the center console, allowing the driver to individually change “virtual gears”.

If a CVT is used for longer periods of driving with a view to saving fuel, it may prove to be more fuel-efficient than a manual gearbox. The continuously variable transmission also enables faster acceleration compared to manual transmissions, eliminates jerking when shifting gears and increases driving comfort. Only the sound of the running engine requires some getting used to by the driver.

The design of the hybrid drive system has a compact and innovative structure. Drive system components ensure the cooperation of the internal combustion engine and two electric machines.

How to properly use continuously variable transmissions

It can often be very important to make drivers and workshop customers aware of what the proper operation of a car equipped with this type of transmission should look like. To avoid damaging the gearbox, change the gear oil regularly. Automatic transmission oil also ages, can become contaminated, and loses viscosity and lubricity with mileage or driving style.

A special feature of automatic transmission oils is the additives that are added to the base oil. The proportion of additives increases with the quality of the oil – they provide longer service life, but they wear out over time. It is assumed that the transmission oil should be changed every 80,000–100,000 km, but first of all it should be changed according to the manufacturer’s recommendations. Manufacturers’ recommended regular transmission oil changes should be taken seriously by drivers, as this oil is responsible for pressure build-up and lubrication. Ignoring these guidelines exposes the used car to jerks and eventually tearing of the pressure belt.

In addition to following the recommended transmission oil changes, there are many other things to consider while driving. Never move the gear selection lever to P (park) or even R (reverse) while driving. This will damage the gearbox. Fortunately for drivers, this is not possible in most cases due to electronic security controls.

They should also avoid increasing the engine speed in the N (neutral) position, it is also forbidden to shift the lever forward D (drive) at high revs.

The gearbox is not designed for such loads. Also, drivers should be careful to stop the vehicle on a slope with the brake and not with engine torque. It is a pity to use the clutch unnecessarily. There is also no reason to switch to N at the traffic lights. The continuously variable transmission is able to compensate for the constant engine speed with a wide range of systems with additional planetary gears or via a torque converter.

The cost of repairing seriously damaged gears depends, among other things, on the type and number of gears and is most often very high – often higher than the purchase of a used car. So it is very important to make drivers aware.

Car users experience many times in their problems with gearboxes. However, they may not pay attention to them due to ignorance or uncertainty. There are many early warning signs to watch out for, so they can avoid transmission failure and bigger trouble.

The most important signs of CVT problems are as follows: